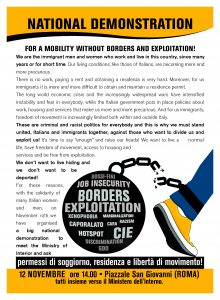 On November 12th, a big demonstration will take to the streets of Rome. On that day, we shall carry from all Italy the demands of those who bravely struggle despite suffering the heaviest forms of segregation and exploitation. The demands of the farm workers of the district of Foggia and the Gioia Tauro Plains, of the porters of the logistics sector from all Italy, of housing rights activists who respond to the absence of houses by reclaiming them, the migrants in transit pushed back at the border. With them will stand all those political and social subjects fighting against the politics of insecurity, precarisation and control of people’s mobility, in the metropolises and in the peripheries.

It will be a demonstration promoted and led by those subjects for whom struggle is the only possibility to act for change, both because they are structurally excluded from citizenship rights – as in the case of migrants – and because they believe those same rights to be void of any meaning and any potential for real political transformation.

The current regime of mobility control is a mechanism that produces irregularity and exclusion and affects different subjects: those coming from other continents but also European migrants and Italian citizens. For decades, immigration laws have been creating precarity, vulnerability to blackmail, and death, inciting a war between the poor, together with securitarian politics and the militarisation of borders through push-backs, deportations, detention and torture, denial of the right to asylum and a reception system founded on profit and on segregation.

More controls and borders restrictions won’t solve the migratory crisis created by wars multiplying across the globe. Only by dismantling the current government of migration and of mobility it is possible to regularise the position of thousands of people who have been living in Italy for years without a residence permit, and therefore forced into an even harsher regime of exploitation. At the same time, it is necessary to grant access to residency rights and the attendant safeguards for everybody, independently from their nationality or condition. House squatters, as those who live in makeshift shacks, barracks, abandoned houses or in the streets, are often excluded from these guarantees.

For these reasons, on November 12th we demand an official meeting with the representatives of the Ministry on Interior, to denounce the irregularities perpetrated by the police and by municipalities across Italy, to ask for papers for all foreign workers and for access to residency and to basic services connected to it, like healthcare and education. Restrictions to mobility also materialise through measures such as the ban against all demonstrations in the centre of Rome on weekdays. This protest will be challenging the securitarian and repressive apparatus strongly limiting our mobility and our liberty, in all its forms.

We cannot wait any longer: the farm workers coming from the South of Italy, as all other participants in the protest, need an immediate response to their demands.